As a kid, I thought Snow Days were the best. First, they were usually caused by snow, which I love. Next, that meant we didn't have to go to school. Now, I loved going to school, but snow days were still wonderful. After all, you could do ANYTHING (well, nearly) you wanted - you didn't have any prior plans other than school.

Well, as a teacher, I'm still the same. As much as I love going to school (or work, in this case), I still love Snow Days. (Now they're called "Calamity Days" because fog, ice, and boiler issues have all caused school closures in addition to snow.) Today, thanks to 6+" being dumped upon us overnight, we had one. Whee!

Before the snow arrived last night (around 7pm), it had been raining and then icing. Which meant that there was stuff for the snow to stick to. And all of the trees (and, more frighteningly, the power lines) were laden with snow. Very pretty to look at. So today, before lunch, I took a walk through town (first shoveling my front walk, and finishing my outing by shoveling my back walk) and took pictures of the prettiest snow laden trees, etc. 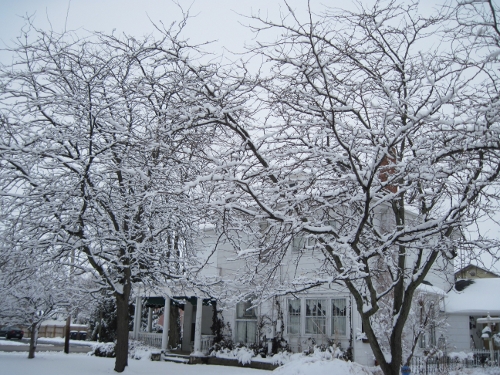 This is a house near the school. In summer it is surrounded by beautiful flowers and plants. Today, it was the Snow Queen of the village. 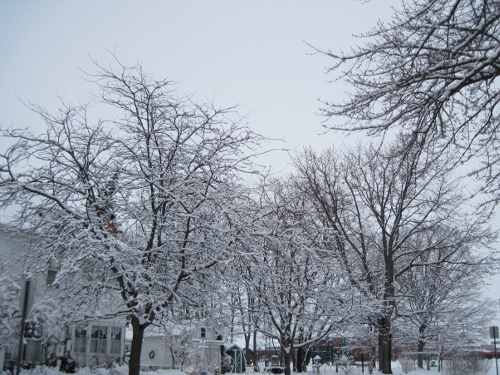 Here is a second shot of the same area. You might be able to see the school behind it. 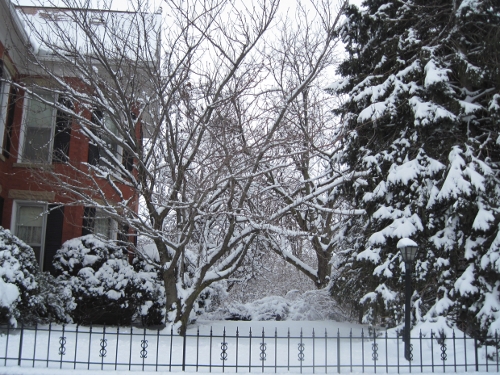